Designing UIs with the EDC Editor

When your application requires real-time changeable layouts, for example, animations, you can write the layout designs using an EDC script, compile it into an EDJ format file, and import it into your application using a UI layout component. You can also write simple and complex design layouts using the EDC script with the EDC Editor. The EDC Editor makes it easier to write the EDC script code and faster to finish your work. If you are not familiar with EDC programming and need more information, see Layouting with EDC. 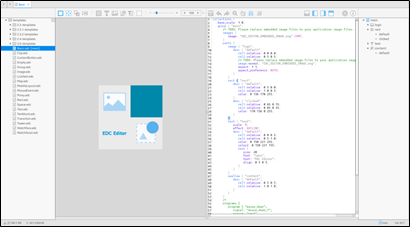 The EDC Editor also provides useful functions for you to develop your application UI. Before using the EDC Editor, familiarize yourself with the functionalities described in the following sections.

The EDC Editor consists of the following views:

Because of its real-time update mechanism, the EDC Editor updates the preview in real-time while you modify the source code in the code view. 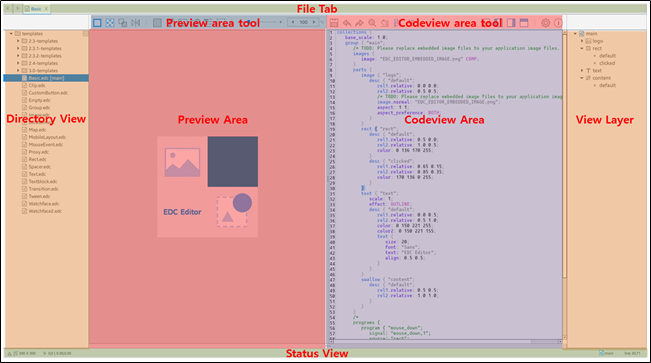 If your EDC collection consists of multiple EDC files, set up a workspace. The default workspace directory is where you opened the EDC file in Tizen Studio.

You can open EDC files in the directory view by double-clicking them. The EDC text file is opened in a new file tab.

The EDC Editor allows only one main EDC file that can be activated in the live view. In the directory view, the main EDC file is displayed with the [main] tag. If the main EDC file contains multiple sub EDC files, you can open and navigate through them. You can open those files in the directory view, or by pressing the F3 key if the text editor cursor is placed on the "include" line in the text view (such as #include "subfile.edc"). To go back to the previously edited file tab, use the F4 shortcut key.

The EDC Editor tracks the currently focused EDC group to display it while you go through the groups in 1 EDC collection. But if you open a new EDC file which contains another collection, you need to manually set up that file to be a main. To let the EDC Editor know that EDC has a collection to be adoptable with its subordinate files, press the F2 key after selecting the new main EDC file in the directory view. You can also change the main EDC file in Settings > EDC Build > Main EDC File.

To change the preview zoom value, use the zoom level controller slider, or press the Ctrl key and roll the mouse wheel up and down while the mouse cursor is in the preview area. 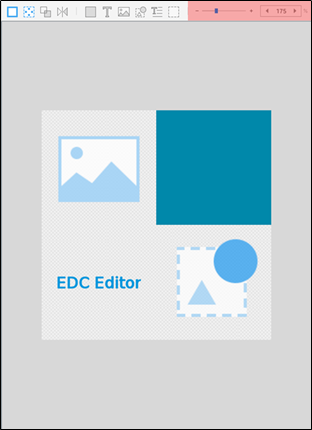 For easy navigation inside the EDC blocks, the EDC Editor provides a tree-style visual tool called the view layer. You can expand and collapse tree items and understand the structure of your EDC layout at a glance.

The following blocks are supported in the view layer:

To navigate the EDC source code through the view layer, click an item in the list. The editor cursor in the code view changes its position to the name of the selected item. For program items in the tree, the view layer provides the play and stop buttons to trigger or stop the programs in the EDC Editor. This helps you to check the programs by seeing the results directly in the preview.

The view layer can be enabled or disabled by the F10 hotkey.

With the status view, you can check the current mouse position, the name of the focused group, and the text editor cursor line position. You can also change the size of the live view in the preview area. The status view shows informational messages to help you with your editing.

The EDC Editor has the following ways of providing interactive feedback information when you edit the EDC source code:

The EDC Editor provides a live edit mode to add part objects to the application layout. 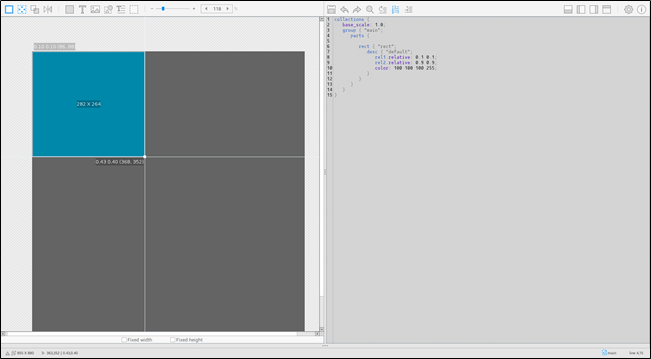 In the live edit mode, a wireframe is used to display the outlines of all parts with solid lines, to enable you to understand the logical boundaries of the parts in a layout. You can toggle the wireframe visibility by pressing the Ctrl + W key combination. 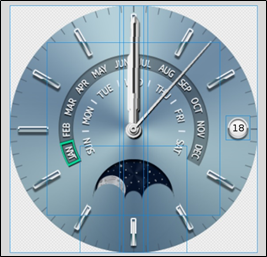 To use the live edit mode:

The EDC Editor displays non-visual parts with symbols so that you can understand how their parts are positioned and sized. Typically, the swallow and spacer parts are dummy parts. You can toggle the dummy parts by pressing the Ctrl + U key combination to show or hide the symbols.

You can swap the width and height of the live view instantly by pressing the swap button in the status view. The swap functionality can be used for simulating some scenarios, such as mobile device portrait and landscape modes. 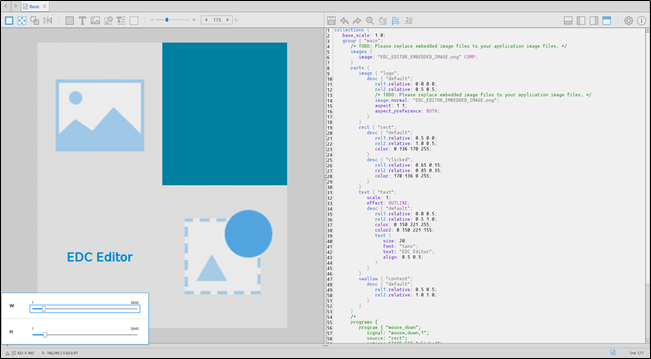 You can set and control the EDC Editor properties in the Settings window tabs: Preferences, Text Editor, and Resources.

The preferences contain occasionally used options in the EDC Editor. In addition, it contains some unique function options, such as Auto Hiding Console, Smart Redo/Undo, and Error Message Red Alert:

The Text Editor tab provides text options to control the font size and type. You can also change the text color highlighting scheme. Double-click a keyword in the preview pane to change its color. 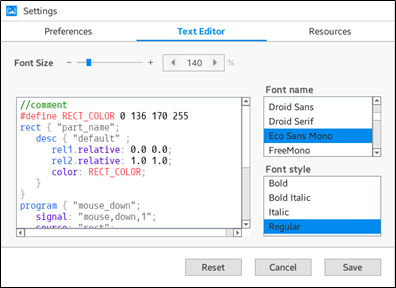 You can control some EDC Editor resources. For example, you can change the image, sound, font, data, and even the main EDC paths. 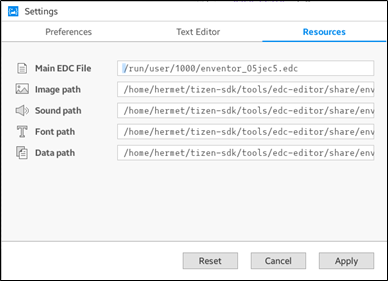 There are 3 ways to start the EDC editor:

Importing an EDJ File in the Source Code

The Tizen Studio Package Manager compiles the EDC files you have written into EDJ files. The name of the generated EDJ file is the same as the original EDC file. After you have edited the EDC file and built the application project, you can normally import the EDJ file in the application source code using the layout UI component.

In most cases, an EDC file contains multiple groups, so you need to specify the name of the group you want to import to the layout:

The elm_layout_file_set() function imports 1 group from an EDJ file. You can pass the EDJ file path to the second parameter and the group name to the third parameter. On success, this function returns EINA_TRUE. 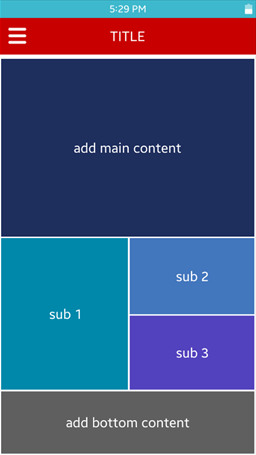