Let me just start out by saying, I've spent 6 hours attempting to setup Tizen studio 3.6 and its by far the most problematic IDE/SDK setup experience I've ever had.

I have a fair amount of experiece using IDE/SDK's, I use things like Android studio and Unity SDK on a daily basis.

So far after 6 hours, and problem after problem after problem, I have the IDE running properly. I still cannot get the emulator to work correctly, all devices just sit at "Booting Kernel" and go no further. I am using an AMD FX8350 CPU. Windows Hyper-V features are turned off. I have no idea how to get this working, and have given up.

So I moved onto trying to running the various example apps on my physical device (Galaxy Watch Active 2). Again after some issues getting it connected, I have connected my watch to tizen studio via WiFi and now I'm stuck on the following error:

I have read I need a samsung certificate to run/install apps on my physical device, BUT the samung certificate extension is not available. The repository URL is not active at:

When trying to enable the Samsung Certificate Extension:

So I have an IDE/SDK that emulators dont work and it cant run apps on my physcial device because of its own broken repository links. So its completely useless.

Super annoyed with the amount of time wasted on this IDE/SDK, I dont even want to touch it ever again at this point, its just one giant hassle of brokenness.

All this being said GWD Works perfectly fine, so atleast I can make crappy drag and drop watch faces, with limited functionality.

I am also getting the same errors as the person above using Tizen Studio 3.6

Samsung Certificate Extension does not show up anywhere under Extension SDK of the package manager.

I also tried manually adding the following repositories, but they all failed:

If I paste  developer.samsung.com/sdk-manager/repository/tizen-certificate-extension_2.0.42.zip into a web browser I get the file downloaded with the following contents:

I only see the Tizen certificate manager .... not Samsung 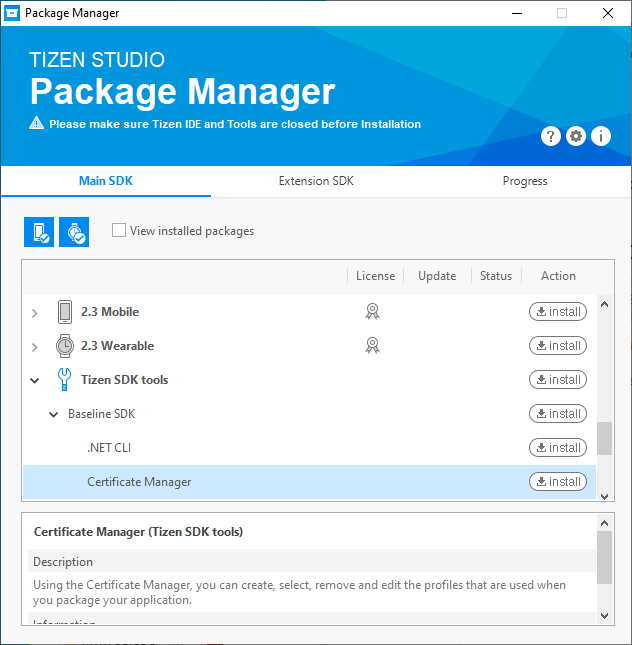 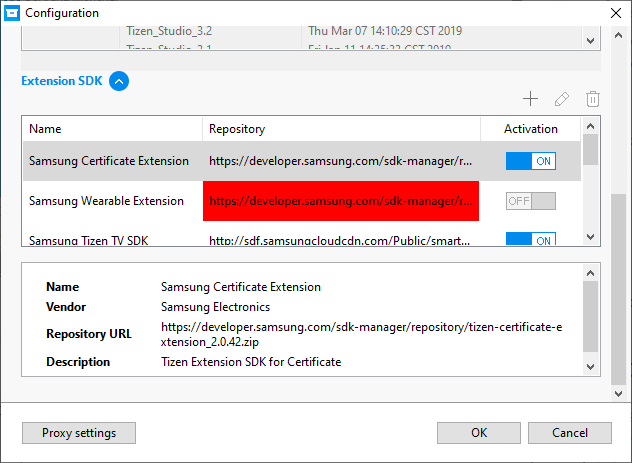 I have no problem building and even running my wearable 4.0 in the emulator, but the run fails on a real device (Galaxy Watch) due to Samsung Certificate issues:

The certificate manager does not show the Samsung Option since no Samsung Certificate Extension is installed.

Also having this problem. My certificate expired and I cannot generate a new one. Anyone can advice on this?

n the menu bar, click Tizen Tools > Certificate Manager.
Click the + button to create a certificate profile. ...
Select Samsung to generate certificates to develop and install to Samsung devices and will you can upload the application to the Store. ...
Select Device Type and click Next.

You must log in to use this service. Log in now?
The tag you entered already exists.
Do you want to report this post as spam?
The post has been reported as spam.
cannot be empty.
Are you sure you want to cancel and return to the list?
The code has been copied to the clipboard.
Enter a title.
All Categories
General Support
Tizen .NET
Web Application Development
Native Application Development
SDK & IDE
--------
--------