I was trying to parse some JSON in a Native app for the Gear. I have a Gear S2 as my test hardware.

When I try this in the 3.0 emulator it works fine. If I try it in a 2.3.2 emulator or on my test hardware the call to json_parser_new() returns NULL. Should this work on 2.3.2? If not what is the recommended parser?

I guess the problem is somewhere in your development environment because it's working properly for me in Tizen Wearable Version 2.3.2(both in emulator and device).

For the below callback I'm getting output as the attached image.

Are you using Tizen Studio 2.5? Which operating system are you developing on? I want to see what happens if I try the same.

So the problem is with Tizen Studio version 2.5. Did you try with version 2.4? I hope it'll work as it worked in my case.

It's time to throw in the towel. While I was able to find an older installer there are still components that it must download. In a nutshell nomatter what I end up with Tizen Studio 2.5 on my system. I **cannot* get Tizen 2.4 installed on this machine. I've reinstalled the operating system 2 or 3 times today to make sure that I was starting from a clean slate for the things I installed.

The code does work for me when I target Tizen 3.0. So I'm just going to drop support of anything prior to Tizen 3.0 for my application (The choice to support it isn't available to me since I can't get an environment that will work with it).

From Configuration window of Package Manager you can turn off the Auto Update option. You can also use a specific Tizen Studio version from the list as below image. Just select a snapshot version and click ok. It'll prompt you to uninstall all the packages of the current version. Please give it a try. 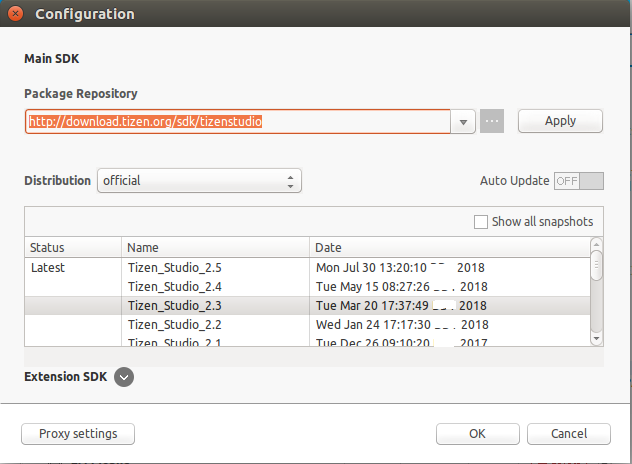 Cool, that got me back down to version 2.4. Now I've got to figure out what the problem is with the debugger attaching to the emulator.

@ K-Johnson - Let me say thankyou for your willingness to help me with this problem. I appreciate the assistance.

On Ubuntu:
Unfortunately the problem is intractable. Before I had resolution for the debug problem I recalled that I could still view the output logs and ran the app. json_parser_new() was still returning NULL. Looking through these forums I found a thread where the debug problem was said to go away on it's own by simply restarting the tools a few times. I tried that and was able to get the debugger to attach and verified the same problem occurred through variable inspection.

The 3.0 emulator isn't completely functional. It initially returned an error saying that SAP needs to be installed manually. According to another thread in these forums this has been resolved by ininstalling and reinsalling the wearable extensions. I tried this and the end result is that instead of only the SAP error I now get two errors when I start the 3.0 emulator (stating that SAP **and** CERT must be installed Manually).

On Windows: The problem is still pretty much in it's original state. json_parser_new() always returns NULL.

My experience has been that the Tizen IDE is buggy as hell. I think the various failures I'm getting (inconsistency in execution of json_parser_new(), ability to attach to a debugger, ability to install without errors) are some pretty baseline things. Between this and some other problems I encountered with the IDE that haven't been discussed here I think I've exhausted my efforts in trying to get something very simple running. I hate to say it, but I think I'll have much more productivity working on

Your effort towards solving this issue is appreciable too. As you've searched and tried different solutions already provided in this forum, I've very less in my hand to suggest you. Over and above, would you please try a little bit more by deleting 3.0 wearable packages, emulators and reinstalling a fresh one?

Note: According to Maik Riechel's last reply in this post, the similar problem was resolved by the installation on a different machine. It may become a last option for you to try. 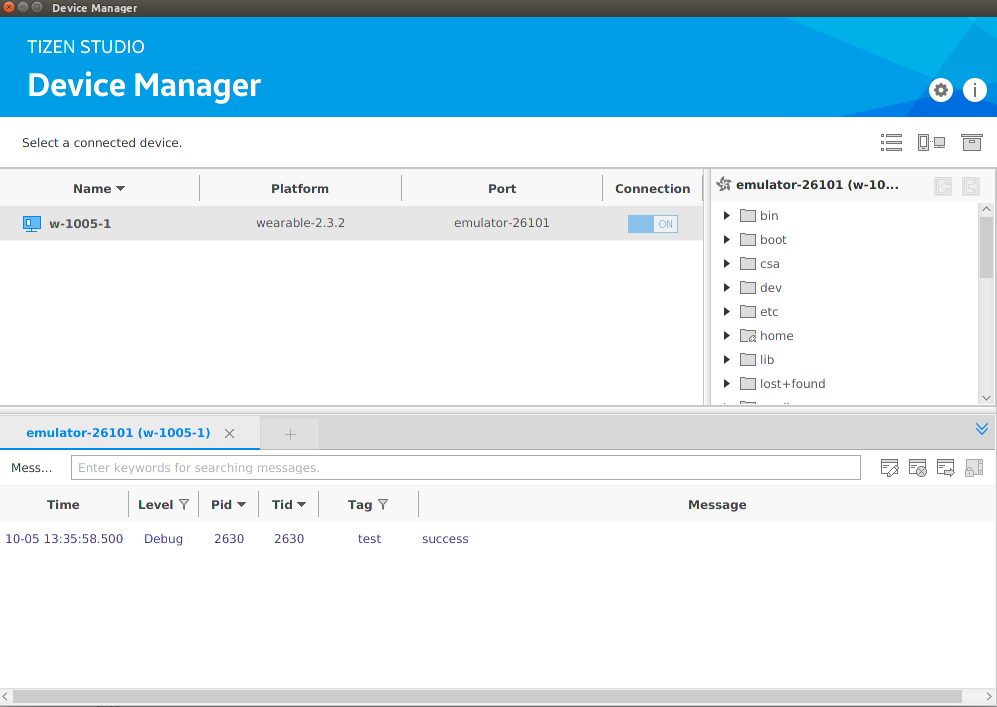 Over and above, would you please try a little bit more by deleting 3.0 wearable packages, emulators and reinstalling a fresh one?

I just tried this on Mac OS X Mojave using two methods. First I went to the package manager and removed both the 2.3.2 tools and 3.0 tools, then just added the 2.3.2 tools. My outcome was the same for this run; json_parser_new() == NULL.

For the second try I completely removed Tizen Studio. Then I reinstalled it and only selected the 2.3.2 tools. I did not install the tools for any other Tizen version nor have I installed any of the extensions. The outcome is still NULL == json_parser_new().

To summarize my attempts:

For the instances above marked as "Clean Installation" I formatted the hard drive before installing the OS, then installing the Tizen prerequisits (ex: Java, other packages).  json_parser_new() returns NULL when I use Tizen  2.3.2 either in the emulator or on either of the watches I have that run 2.3.2. If I call json_paerser_new() twice in the same program then the debugger detaches and the program crashes. I can reliably and repeatedly repeat this across the various operating systems. This does not occur for me on the 3.0 emulator.

I would almost guess that the problem is in the 2.3.2 emulator, but I see the exact same behaviour on hardware.

I thought the problem might have been in the code. But creating a new json parser is not anything in the json documentation or even the json-glib and g-object source code that relies on any OS specific functionality (I examined the json-glib source code while I was trying to figure out what was going on, assuming that Tizen doesn't use some modified version of it). Also one might expect a problem in the code to have problem execution across both the 2.3 and 3.0 emulator.

I thought that perhaps there was something wrong with my initial program, but I see the same behaviour in any program even when I made one that **only** attempted to creat the parser and then returned.

I considered that there was something wrong with my programming environment. But as you can see from the table above I encounter this across many environments.

At this point I'm left speculating this is a problem that someone will encounter if their Tizen Studio environment were recently setup. I can't imagine there is something that I am doing that is uniformly screwing up the environment across different operating systems and operating system versions.

I checked glib version at Tizen 2.3.2

so fix your code below

Thanks. I never would have figured that out. After some searching on that I found a conditional compile statement concerning it.

Perhaps they are targeting devices that have a newer version of glib, but some of the other Tizen samples and exemple code never make this call (like this one)

I will recommend it to my friends. This posts is very interesting, thanks for letting us know.

You must log in to use this service. Log in now?
The tag you entered already exists.
Do you want to report this post as spam?
The post has been reported as spam.
cannot be empty.
Are you sure you want to cancel and return to the list?
The code has been copied to the clipboard.
Enter a title.
All Categories
General Support
Tizen .NET
Web Application Development
Native Application Development
SDK & IDE
--------
--------