JSON (JavaScript Object Notation) is lightweight data-interchange format and easy to understand for developer and machine. This document provides the guideline for developer who wants to make a Tizen native application which works with JSON-GLIB library. And through sample code, it explain how to parse JSON tree which is loaded from file and from buffer.

Followings are the preconditions and environments of sample application

To use JSON parser in your code, include this header file. As Tizen 2.3 support JSON-GLIB version 0.10.4 natively, you don’t need manually download this library and install it on your project. And you can visit web site(https://developer.gnome.org/json-glib/) of JSON-GLIB as API guide is provided.

Next step is to create a parser instance as following:

And there are several way to load data in JSON parser as following and Sample code of this document get the data from File and Buffer.

When error occurs during loading JSON stream, you should free the allocated memory using g_error_free(). Otherwise you can retrieve the top level node by following way:

As we store object and array including fundamental value using JSON, Linked list is convenient for storing/loading it danamically.

Eina is one of EFL core libraries which can be used in Tizen native application. This is a libray for data types and useful tools. Eina support List data type and it is double linked list. We’re using three default node to store Key and value to present JSON structure. In case of Object type of JSON data, we create new Eina list inside to store it.

Following is data of array in the sample (\jsonParser\src\jasonparser.c).

Following is data of file in the sample (\jsonParser\shared\res\ jsonSample.json).

Here is the defined structure of Eina List for JSON in the sample.

ParseJsonEntity() in the sample code is the main loop to execute JSON parsing. As JSON has data as three type like Object, Array, Value, the main loop intenally detect it and parse its content.

If the current node is ‘object’ or ‘array’ type, it continue to parse JSON tree by ParseJsonEntity() recursively. but in case of ‘value’ type, it extract values by ExtractValue().

Next is the step for objects:

If the current node is ’array’, we perform next actions:

If the current node contains value (key is already stored in Eina_List before), the value is extracted by  ExtractValue(root) and it it added to Eina_List (list contains one item only).

If value is part of array and there are no ‘keys’ (it was not parsed as object),  NULL is added for every node of ‘key’.

If the node type is JSON_NODE_VALUE, it is parsed by ExtractValue().  At first we should detect value type this way:

After this, if value is ’string’, we copy it into allocated memory by json_node_dup_string():

If it is ‘double’, ‘int’ or ‘bool’ types, we copy it into allocated memory by this way:

As parsed JSON data ( keys & values) are dynamically added into allocated memory and it should be freed manually. To avoid memory leak, you should use g_object_unref() after parsing is done. And it can release all the memory allocated for the JSON parser.

3 How to run sample code

Following is screenshot of sample. 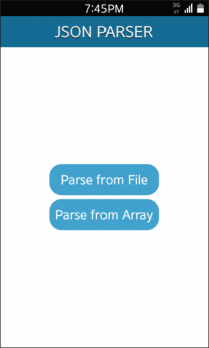 Following is a result of ”Parse from File” menu: 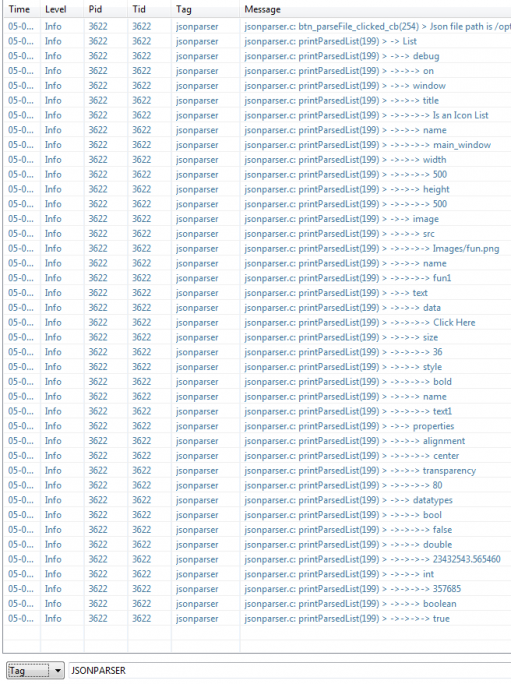 Following is a result of ”Parse from Array” menu: 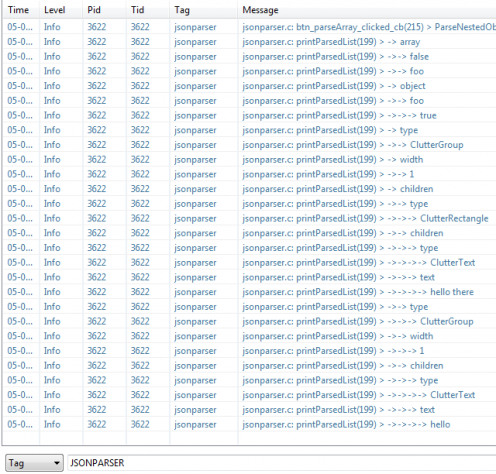 As JSON is commoly used nowadays, parsor is necessary module in the application. This tutorial will be helpful to understand how to use JSON-GLIB library in your native application.