Getting started with Raphael JS Library

Raphael JS is a small JavaScript library which allows working with vector graphic in your Tizen Web application. It uses the SVG W3C Recommendation and VML. By using SVG objects, each of them is also a SVG DOM object, which allows for example attaching event handlers to them.

To use the Rapheal JS library:

Note: For your easy reference, on a particular functions used/described in this article has been hyperlinked to the suitable fragments of the Raphael Documentation.

For more information about the Raphael JS library and for some amazing demos, visit raphaeljs.com. The documentation is available here. A great page showing the capabilities of the Raphael JS Library can be found here.

The RaphaelPaint sample application demonstrates how to use the Raphael JavaScript Library to create and work with 2D vector graphics.

The UI of the sample application consists of a single page. After launching, you can see a toolbar on the top of the page and an empty canvas. The toolbar contains the following options: “arrow”, “rectangle”, “square”, “triangle”, “circle”, “ellipse”, “star”, “eraser”, “fill color”, “stroke color” and “clear canvas”. The first one allows the manipulation of the selected shapes (moving, scaling and rotating). The next six options are responsible for the drawing of typical shapes. The usage of other tools is self explanatory. 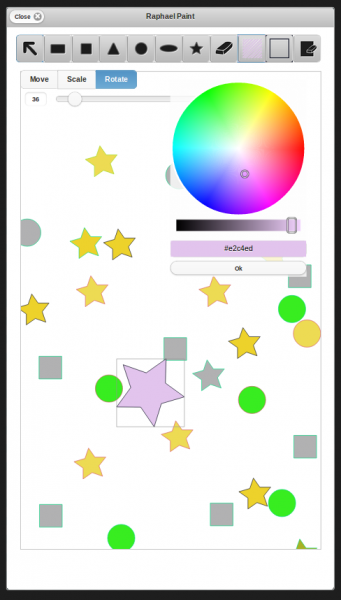 You can draw shapes using Raphael JS in two ways:

Both of these ways are described below.

All shapes are drawn on the Raphael paper, so to use the Raphael JS framework you must first create at least one its instance. You can do this by using the Raphael() function. This function can take several different sets of arguments. The sample application uses the following one:

container represents a DOM element, capable of holding other elements. The Raphael paper is drawn inside this element. Instead of applying container as parameter you can also define the (x, y) position of the paper.

When we have our drawing surface, it is time to draw some shapes onto it. To operate this surface, we need the coordinates of the click position. For this purpose we need to attach an event handler to the container:

The getBoundingClientRect() function returns a TextRectangle object with four attributes: top, left, right, bottom. These attributes define the container’s position. When you click inside of the container, the callback function gets an event object (e) as a parameter which has pageX and pageY attributes holding click position. This position is relative to the upper-left corner of the device screen. We have to convert it to position relative to the upper-left corner of the container by doing a little math:

Where rect means the TextRectangle object returned by the getBoundingClientRect () function. 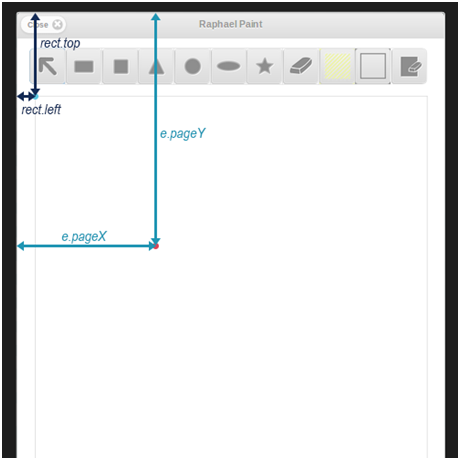 Figure 2 Determining the coordinates of a drawn object

You can now draw shapes in the proper place (of course if you choose any tool other than the arrow).

Note: The coordinate system for Raphael is the same as for the canvas. 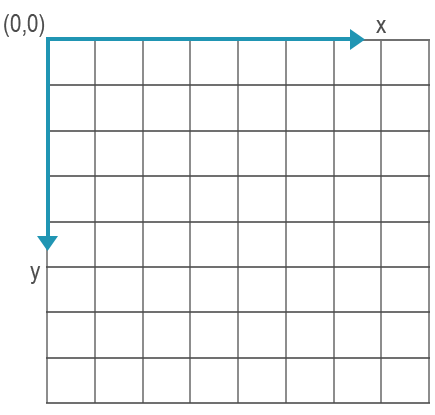 As mentioned before, there are three built-in shapes provided by the Raphael JS library. To draw them you have to use the following functions (the following images describe how to understand the input parameters): 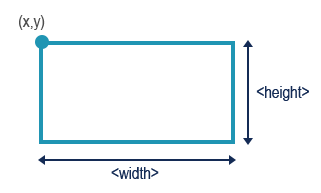 We also use a paper.rect() method to draw a square (a rectangle, in which the width = the height). 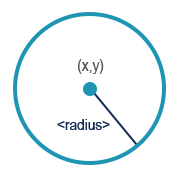 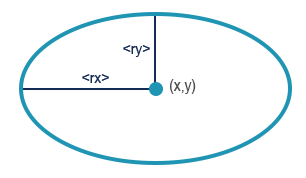 But how to draw other shapes (e.g. triangle, other polygon)? We can use “paths”.

A path is a string consisting of a command and space separated arguments, e.g. 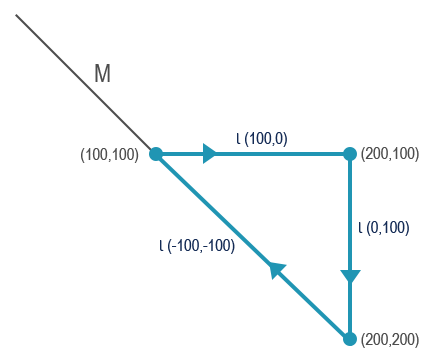 The same effect would give a path:

The commands and their meanings according to the Raphael reference:

There are two types of commands. The command “L” (with uppercase) doesn’t mean the same as “l” (with lowercase). The first one type means absolute command, the second one – relative. What is the difference?

You can find more information about commands here.

Newly created shapes have visible bounding boxes (just as these selected). To get the bounding box for any element, you can use the Element.getBBox() function. The only parameter which the function takes is a Boolean value. It specifies whether you want to have a bounding box with the original shape (before transformations). It is optional and by default equals false. An example of using this function:

As you can see, the function gets the bounding box for selected shape and draws it. The box is added after creating the shape and every time the element is dragged.

To change or get the attributes of the drawn element you can use the Element.attr() function.

These two ways of setting attributes are equal:

The RaphaelPaint allows moving, scaling and rotating of objects. To provide these transformations you can use the Element.transform() function. The way of invoking this function is similar to the method of creating paths. You need to create a string with commands and their parameters. The sample application uses three of the four commands provided by Raphael JS:

Note: Describing the m (matrix) command isn’t in the scope of this article. You need to apply the created string as parameter of the Element.transform() function. In case of our sample application the applyTransforms() function is responsible for this:

that.translate, that.rotate and that.scale properties are created and initialized while setting properties of newly created shape. These properties will be described in more details later. 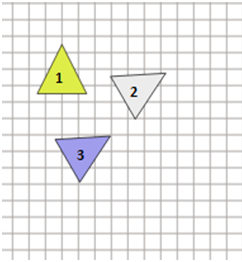 1 – the triangle without any transformations,

Keep that in mind while adding transformations to Raphael elements.

You know how to apply created transformation to an element. It’s time to set commands’ attributes of the transformation. These attributes are related with drag event. Below fragment will explain “how”. Firstly, you need to add the event handler for dragging of the element you can use the Element.drag() function.

You can find event handlers for moving, drag start and drag end for all drawn shapes at the ./js/transforms.js module.

The first parameter defines the final attributes’ values for the animated shape. The second one specifies the animation duration (in milliseconds). The Element.animate() function takes also a third and fourth parameter that respectively mean the easing type and callback function (called when the animation ends).

The RaphaelPaint sample application uses the Element.animate() function when you drag some element. When a drag-start event gets invoked, the fill-opacity attribute of the shape decreases and the on drag-end returns to its previous state.

You can draw shapes, change their attributes and add transformations and animations. But how to select the element, which you want to manipulate? Raphael JS proposes the Paper.getElementByPoint(x, y) function. It returns the topmost element having the (x,y) point contained within its shape. x,y represent the x and y coordinates from the upper-left corner of the device’s screen (look at: figure 2).

You can remove the selected element from the paper using the ‘Eraser’ tool which invokes the Element.remove() function.

If you want to remove all the elements from the paper, you can use the Paper.clear() function. It doesn't take any parameters, e.g.

We hope this article will show you how you can utilize the Raphael JS library in your Tizen Web applications. You can use it to create: