Tizen Web applications have the ability to broadcast a custom event to all applications (the ones listening for that particular event). Thus, a developer is facilitated with triggering custom events depending upon need.

Broadcasting and listening custom event is an easy to use and powerful tool for application developers. For Example, while measuring Heart rate Sensor data an application developer can consider reaching 140bpm a ‘high bmp reached’ event (custom event) and broadcast that event to other applications that would trigger necessary responses like communicating with a web server to inform emergency contacts and logging related health data from available sensors, etc.

‘Application’ interface defines the current application's information and basic operations. It also provides broadcastEvent() method to broadcast events to all the listeners which are listening for this event.

i) EventInfo ‘event’:
EventInfo is a Dictionary type data which identifies an event with information. Event could be of two types: System events and user events. The custom event to broadcast is a user event. Properties of EventInfo:
i-a) Application Id ‘appId’
While broadcasting, ‘appId’ acts as the identifier of the application. System events do not require an application identifier to be specified. If one is specified,            the event will be interpreted as user event.
i-b)DOM String ‘name’
‘name’ describes the event which can only contain the ASCII characters "[A-Z][a-z][0-9]_" and may not begin with a digit. In our sample implementation the            custom event is named as ‘registration_event’.
ii) UserEventData ‘data’
This type is user defined event data to broadcast.

As broadcastEvent() is a method of Application interface, at  first, the application object defining  current application is retrieved in ‘app’ variable.

Variable ‘appEvent’ is an EventInfo dictionary. AppId of EventInfo is set by default; here the name of the custom event is ‘registration_event’.

‘Application’ interface provides addEventListener() method to add a listener. The Listener will invoke a callback function whenever specific event occurs.

i) EventInfo ‘event’:
Event which will invoke the callback. This refers to the exact EventInfo that is broadcasted from sender app.  Receiver app has to set appId of Sender application as appId of the event. Also receiver app has to set the specific event name it wants to listen. In our case the event name is 'registration_event'.
ii) EventCallback ‘callback’:
Refers to the Callback function to be invoked when the particular event occurs. Callback method signature:

‘Application’ interface also provides broadcastTrustedEvent() method which broadcasts a user defined event. Only applications having the same certificate as sending application can listen to event in this case.

Input Parameters are same as broadcasEvent, only the difference is event listening eligibility is based on certificate.

To show the data transmission, two Input field ‘Name’ & ‘City’ is set on UI of event generator application. User would entry his/her name & city to complete registration. For these sample implementations, this ‘registration completion by user’ is considered as an event. Once, the user registration is done, a custom event named ‘registration_event’ is broadcasted.

Here, event generator application possess appID : ‘jaCsRBNYbE.EventGenerator’ and the name of event is set as ‘registration_event’. broadcastEvent() method of Application Interface is invoked to broadcast the event. (Fig-3) 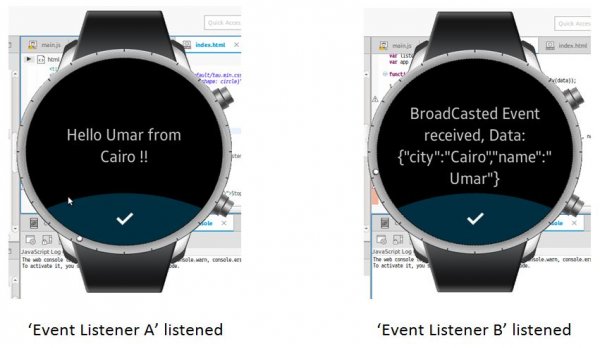 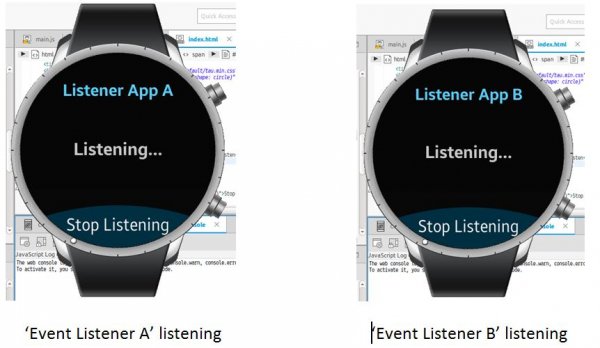 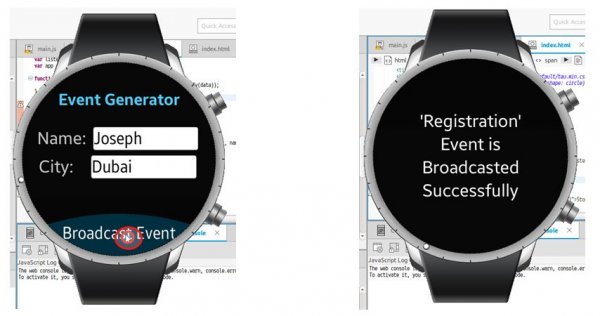 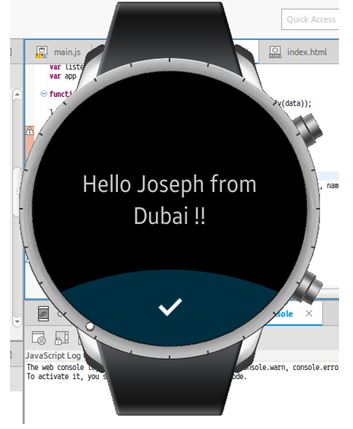 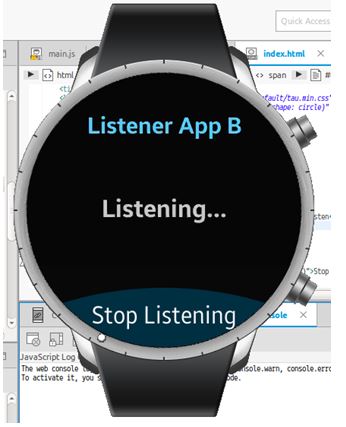 So, in this case, ‘Event Listener A’ listens the broadcasted event and shows the greeting. (Fig-7)

But ‘Event Listener B’ can not listen to the broadcasted event as ‘Trusted’ protocol is used and it has different certificate from ‘Event Generator’ app. (Fig-8)

Source Code of All three applications is attached.