The EFL is event-driven. This means that the application polls for data, and listens for events to interact with it.

The Ecore library provides the main loop abstraction. It gets data when data is available and sends the events so that costly polling threads are not needed. Ecore manages polling, timers, events, and file descriptors. When there is no ongoing event, the main loop automatically enters an idle mode, minimizing the power consumption. The loop wakes up when needed.

When your application is running:

Ecore provides timers, which schedule events that are executed later at a specific time. The event can occur once or several times at specific intervals.

A timer callback prototype looks like the my_timed_cb() callback function. This function receives data from the application, and returns a Boolean value to specify whether it is called again or completed. The following macros are also provided:

To create and destroy a timer:

To manage a timer:

Animators are a specific type of timer, specially designed for on-screen animation purposes:

To create an animation that runs for an indefinite time:

This example looks the same as the one using an Ecore timer. The ecore_animator_add() function takes the callback function and data to pass to it, and returns an Ecore_Animator object. The function is called at a system-defined interval until it returns ECORE_CALLBACK_CANCEL instead of ECORE_CALLBACK_RENEW.

An animator callback for an animator running a specific time has a different prototype than the forever running animator.

To create and destroy the animator:

To manage the animator:

Ecore provides an infrastructure to monitor file descriptors, so that files do not have to be blocked or polled to read or write on them. Instead, monitor sockets, pipes, or other streams are used to get a file descriptor.

To manage the file descriptors:

EFL is not entirely thread-safe. This means that if a task is running in another thread and, for example, an Evas object shows the status progress of this task, the object cannot be updated from within the thread. Updating can only be done from the main thread that runs the main loop.

Ecore provides a facility to perform tasks on separate worker threads. It is not a simple wrapper around standard threads provided by the operating system. With Ecore threads, it is easier to dispatch a worker function to perform some heavy tasks and get the result once it completes. It does not block the application UI. It is also easy to cancel and reschedule threads. Several threads can be launched simultaneously, since Ecore schedules them according to the number of processors the system has and the maximum amount of concurrent threads set for the application.

Ecore has 2 kinds of threads:

Ecore creates a pool of worker threads. The exact count is computed from the number of CPUs or cores, or it can be specified by the application itself.

When a worker thread is idle, it picks a job to execute from the waiting list until there is none left. In the following example, there are 2 threads defined by my_short_job() and my_feedback_job(). Both threads take 2 parameters: some data passed to them, and the actual thread running. Call a callback when the jobs end, whether they are cancelled (my_job_cancel()) or end normally (my_job_end()). 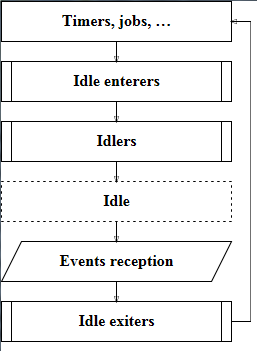 The idle enterers, exiters, and idlers all have the same prototype, my_idler(), which receives data and returns ECORE_CALLBACK_RENEW or ECORE_CALLBACK_CANCEL to tell Ecore whether it wants to be called again or is finished.

To manage the idlers: