An EDC (Edje data collection) file is a text file that contains the code describing the position, size, and other parameters of graphical elements that compose the visual aspect of your application. In addition to graphical elements, it can also handle sounds. EDC is a description language where the objects of an interface are described by using a text description.

The EDC file has the .edc file extension. The syntax for the EDC files follows a simple structure of blocks that can contain properties and other blocks.

The following example shows the basic structure of an EDC file:

The following chart shows the details of the top-level blocks.

The following figure shows the relationships between blocks. 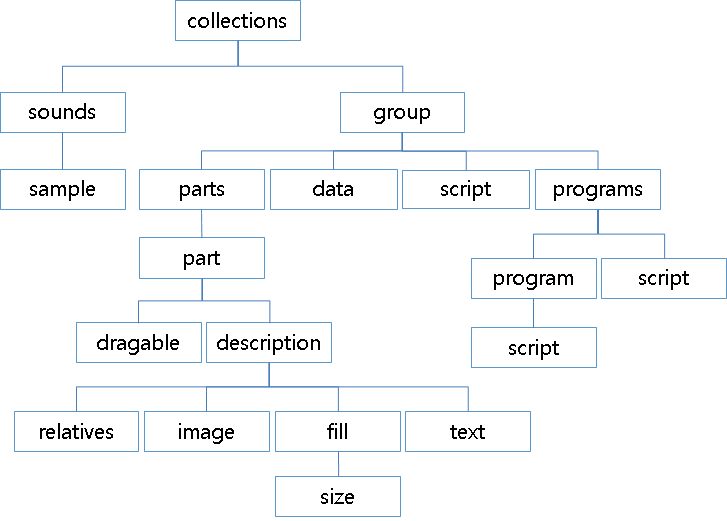 The following example shows an EDC file that contains only 1 part and 1 program. The part is a rectangle with a blue state and a red state, and the program changes the state from blue to red when the user clicks the rectangle:

The program is triggered when a signal arrives from a specific source (in the above example, all the sources are taken into account). When launched, the program does the action (changing the part state) on the target (the rectangle).

An EDC file needs to be compiled into a .edj file using the Edje library tools. After compiling, the .edj file can be used by a native Tizen application. The Tizen Studio automatically calls the edje_cc tool during the project building, if it finds an EDC source file in the ../res/edje/ directory.

The following Tizen Studio compilation log extract shows that if your EDC file uses images, they must be copied to the ../edje/images directory. Fonts and sounds go to the ../edje/fonts and ../edje/sounds directories. The Tizen Studio builds the helloworld.edj file in the ../res/edje/ folder.

You need to connect the .edj file to the C code. It can be achieved by using a layout, one of containers. If you use the basic Tizen EFL project template, it reduces the time to worry about the connecting process. For more information on using the basic Tizen project template, see Creating Your First Tizen Mobile Native Application or Creating Your First Tizen Wearable Native Application. If you want to know the way to use and connect a layout in detail, see Layout.