Application signing is the process of digitally signing executables, scripts, and content of an application to confirm the application author and guarantee that the application has not been altered or corrupted since it was signed. The process employs the use of a cryptographic hash to validate authenticity and integrity.

Tizen requires that all applications are digitally signed with a proper signing key and certificate before they can be installed.

All Tizen applications must have at least 2 signatures:

Tizen API privileges represent the ability to use a certain set of sensitive APIs and secure system resources. The privileges are categorized into 3 levels according to their security and privacy level:

Signing Flow and Getting Certificates

You can sign your application with your own author signing key and a testing distributor signing key in the Tizen Studio. With those, you can install and test the application on your test device and an emulator.

The following figure illustrates the signature and certificate flow.

A device vendor can disallow unauthorized applications to be installed on its devices to protect its devices from viruses and malwares. Samsung also disallows unauthorized applications to be installed on its Tizen devices. In such cases, you must get an author certificate and a distributor certificate from the device vendor. For more information, see Issuing a Tizen Certificate and Running Applications in Commercial Devices.

The application signing scheme of Tizen follows the specification of the XML Digital Signatures for Widgets specified by W3C. 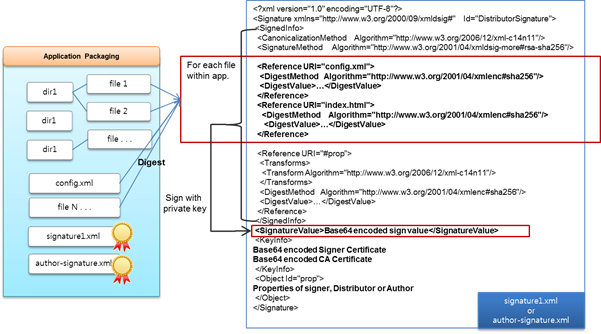