This guide gives a brief description of UI structures and demonstrates how you can develop and design native UI applications with tools.

This documentation has been created based on the mobile profile.

When talking about the development of Tizen native UI applications, you cannot avoid EFL. Tizen platform uses EFL as a UI framework that provides both a visual outlook for user applications and significant performance benefits.

EFL provides streamlined graphic core libraries that you need to create powerful applications. EFL has comparatively low memory requirements but provides high performance, and supports a retained mode graphics system and user-centric features, such as themes, 2D/3D effects, and accessibility. In addition, EFL supports various resolutions with the same layout, fast and small file systems, a variety of programming language bindings, and separation of UI and logic. Even though the EFL UI toolkit is used mainly for 2D-based Tizen native applications, it also supports 2.5D and 3D effects and 3D objects.

An important aspect of EFL is efficiency, both in speed and size:

The key characteristics of EFL explain why Tizen has adopted EFL as its UI framework:

The following sections describe the most important features (fast performance, and UI and logic separation) in more detail.

Fast Performance with the Retained-mode Rendering

The main reason Tizen uses EFL is its speed. EFL is highly optimized by using a scene graph and retained-mode rendering, resulting in EFL being fast even in software rendering.

A graphics system adopting the retained mode is basically responsible for responding to all repaint requests for rendering the application objects. Clients do not directly cause actual rendering, but objects are redrawn when parts of them are updated. In other words, since EFL (Evas) works with the retained mode, there is no need to command any drawing.

Separation of UI and Logic with Edje

EFL supports EDC files for the UI layout and theme:

The following figure describes the behavior of the EDC files.

EFL is a collection of libraries that cover a range of functionality from managing the application life-cycle to rendering graphical objects. EFL libraries build on top of each other in layers, steadily becoming higher-level, yet allowing access to lower levels. The higher up you go, the less you have to do yourself. Elementary is at the top, but you still access the layers below it for common tasks, as there is no need for Elementary to wrap things that work perfectly well as-is.

To learn more about each library, go to Introduction. This section only briefly describes the hierarchical structure of your application on Tizen. 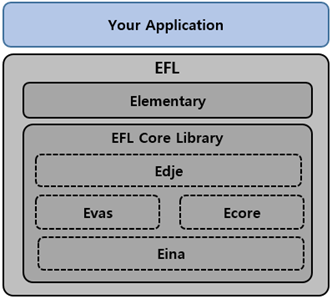 When you create a basic EFL application, you use the following main libraries as a basis:

To develop a UI application, you must understand the hierarchy structure used in EFL.

The following figure illustrates the most popular view hierarchy for managing multiple views. 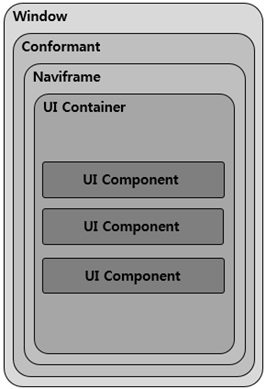 If you want to make a structure for each situation (single and multiple views), the following figure illustrates a possible structure. 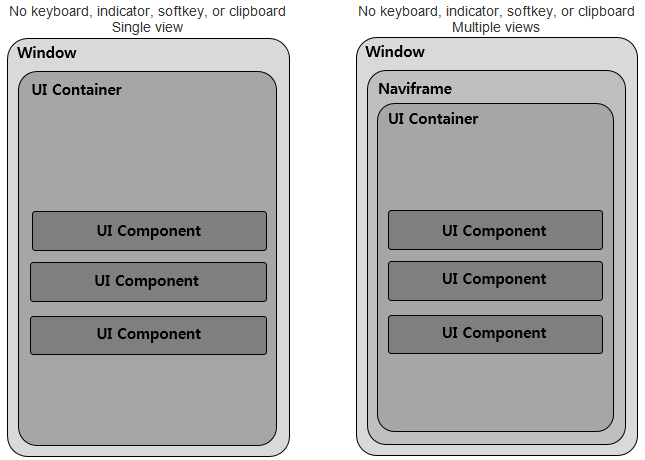 The EFL Elementary is a set of fast, finger-friendly, scalable, and themeable UI component libraries. The number of supported UI components is around 80, including both containers and non-containers. Originally, the Elementary was developed as part of the Window Manager development on Desktop devices. For the mobile profile, Tizen reused the proper UI components and created new ones, and then enhanced and adjusted all of them for Tizen native applications.

The mobile UI components were designed to allow the user to interact with touch screen-equipped mobile devices. Therefore, when developing mobile applications, you can easily use them through the mobile-related infrastructure in company with view management and when reacting to touch events and the user finger size.