This feature is supported in wearable applications only.

Although the Web was originally designed to structure documents for large-scaled Internet world, with CSS (Cascading Style Sheet), JavaScript, and various device APIs, it is quickly evolving to a complete runtime environment for applications. In addition, its W3C open development model and the flexibility of its CSS-based presentation make it every developer's choice as the next development platform. CSS is the key technology for flexible presentation, and it is used to describe the look and formatting of HTML documents. The role of CSS is to determine how the logical structure of the document is displayed to the user.

Using some CSS techniques and Tizen Web engine mechanisms, you can design your application UI layout so that it displays properly on multiple devices:

A typical application developer designs an optimized UI for a target device with a fixed layout and high-quality resources. This approach usually results in a nice look for the end user, but can sometimes result in an ugly layout, which makes the application unusable. And this unfortunate result can occur merely due to a change in the device form factor.

Since the presentation and business logic are strictly separated in a Web application, it handles the device form factor change better than native applications. One single layout, taking advantage of Web technology, can ensure usability even on multiple devices with different form factors.

To design applications with a single layout, you must consider the following issues:

For a complete application layout that considers all the above issues, see Single Layout Example.

Viewport and Other Meta Tags

To use the tag in an HTML file, set its name and content:

As shown in the following code snippet, use the viewport meta tag to tell the Web engine which device width is targeted by the application. The Web engine can estimate the scale factor based on the target content size and the real screen width. For example, usually almost all wearable applications have the following viewport meta tag, which sets the viewport width to the appropriate size based on each device:

If you want to set your content layout to the target width of 320 px on every wearable device, use the following meta tag:

The viewport meta tag has other properties, such as height, initial-scale, minimum-scale, maximum-scale, and user-scalable. However, do not use those properties unless you understand their exact meaning. Wrong values can cause the Web engine to incorrectly fit the application content to the current device.

The relative layout concept means that the element size of all content is set as a relative unit (such as percentage), and not as absolute values (such as pixels or points). In responsive Web design, this concept is also known as fluid grid (for more information, search for responsive web design in your Web browser). To achieve a layout that works on multiple devices, you only need to know about relative layout, not all the other concepts of responsive Web design. 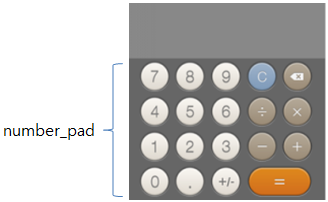 An application with this relative layout is auto-fitted when it runs on an unexpected device, such as the device with a 360x480 resolution shown in the following figure. Even though this adjusted layout may not be as good as the original, it is good enough, since it shows a usable application UI. 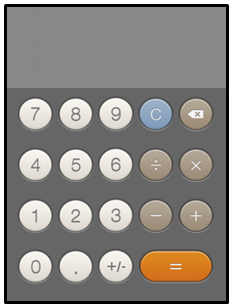 The following figure shows what happens if you use an absolute 320x320 layout. The presentation is definitely ugly (with an empty white space at the bottom) and usability reduced, although the calculation logic itself still works. 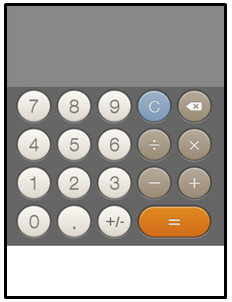 While the content layout itself becomes the application UI layout on a Web page, a typical wearable application layout consists of a header area, content area, and footer area. With this trend, many wearable Web applications are designed by separating the 3 areas explicitly. 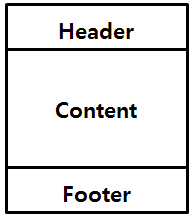 Not setting the place of the header and footer areas clearly can easily cause problems for your layout. For the header, the side-effect is relatively small. However, a wrongly defined footer area can be quite visible and lead to poor usability. The following figure shows the original layout of a pedometer application that consists of a header, content, and footer, with a Stop button set in the footer area. 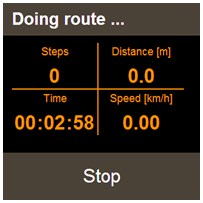 In this case, if the position of the footer is not defined explicitly or if the position and bottom properties do not have proper values, an ugly layout can be displayed on an unexpected device, such as the 360x480 screen shown in the following figure. 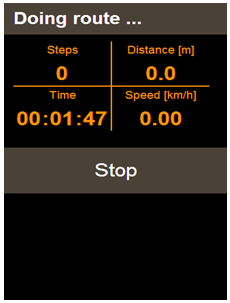 To make the layout correct, define the position property as fixed and set the bottom property explicitly as 0 px:

The following figure shows the same Web application running on the unexpected device after the footer properties are defined properly. With the correct values, the Web application is usable even on a new target, not planned during the development phase. Note that if a relative layout is also applied to the content area, the result is an even better layout and further improved usability. 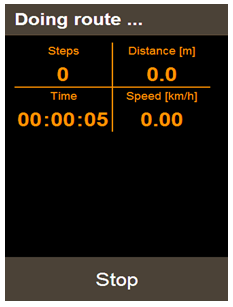 One of key elements used in the content area is a media element, including image and video. As all other elements, the media elements also must be placed within a relative layout to allow the application flexibly handle resolution changes. When such relative sizing is applied to a media element, it is called flexible media in responsive Web design.

The main issue when making a media element size relative is to ensure that the usable ratio does not change. The following figure shows a video element that works on both 320x320 and 360x480 resolutions, even though the aspect ratio of the screen is changed and scaled up. Basically, when handling media elements, you want to keep the size or ratio of the element the same as on the initially targeted device, even when displayed using a different resolution and aspect ratio. To achieve this, set the width and height properties of the media element with percentage and the auto keyword. 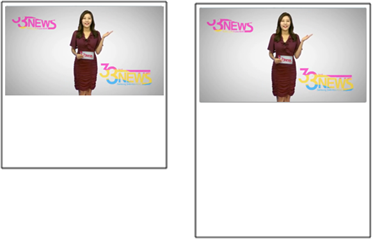 The following figure shows an example of wrong usage, where usability decreases as the video element is simply scaled up based on the aspect ratio change. If you set the video element size using a fixed size like this, you get no benefit from the increased resolution, and the layout on the whole screen becomes inharmonious, decreasing usability. 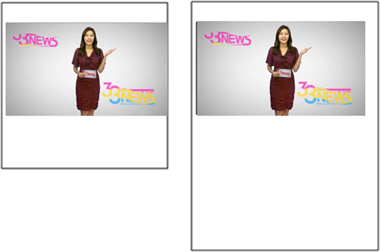 This section illustrates a complete application layout that takes advantage of the issues discussed in previous sections. In particular, it shows how to set the viewport properly to help the Web engine scaling mechanism and how to create a CSS-based layout.

First of all, set the targeted size of the content area as 320 px in the viewport meta tag, and disable the user-scalable property, as shown in the following code snippet.

In the above HTML code, the content area consists of 4 <div> box elements, and their UI layout is described in the style.css file. The following CSS code programs the layout and the specific box element styles that were defined in the HTML file.

The code snippet shows that the content size is set to be same as the viewport size. Each box is filled with a different color and placed so that it fills a quarter of the content area. Because each box size is defined with the width and height of 100%, the relative size of each box element remains the same even if the viewport size changes.

The following figure shows a final view when the 320 px is set as a target device in the HTML file. As defined in the CSS file, the content area fills the whole screen, 320x320 pixels, and the 4 box elements equally divide the area. 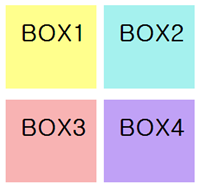 The following figure shows that the relative layout and scaling are correctly applied even when the same application is run on a mobile device with the aspect ratio of 16:9. 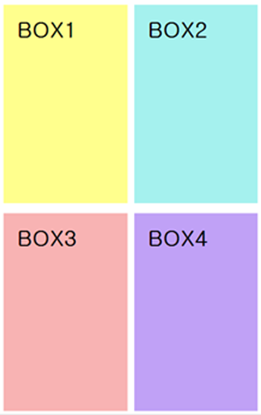 The following code snippet shows an example where the background color is replaced with an image while the layout is exactly same as in the 4 box example. The following figures show how the layout including media elements (such as images) functions exactly like the basic box layout. 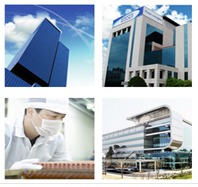 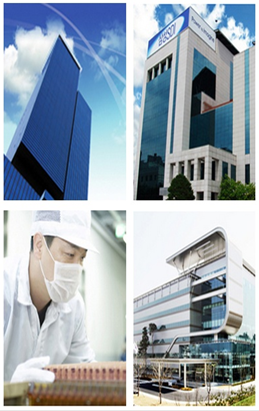 In many cases, the desired end result for your application can be achieved using scaling and a relative layout within a single layout. However, this approach does not always provide the best quality for the end user.

You can support the best possible layout and usability with some additional development efforts. For instance, you can create an application which, on a tablet, shows the main information (watch face) and also delivers more meaningful information (calendar), while on a watch device the same application only displays the main information (watch face). This kind of end result, as shown in the following figure, cannot be achieved by only scaling up the whole layout of the watch device.

Figure: Application for a watch and tablet

Since the 2.3.1 version, Tizen also supports a special media query feature to provide device shape-based layouts. If you want to create an application for both square-shaped and circular-shaped devices, you can easily migrate your application to support both shapes.

Figure: Application for a square and circular device 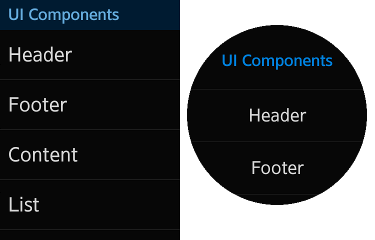 The difference between multiple and single layouts is that, in the multiple layouts, the content width of the viewport meta tag is set to "device-width". This sets the layout viewport width to the ideal viewport width and tells the Web engine that the application adapts to the device width. In short, the "device-width" setting is needed to create an adaptive and responsive Web application.

To use the meta tag in an HTML file, set its name and content:

Media queries consist of a media type and expressions of media features.

The media types indicate the media on which the current Web application is running. They are defined in HTML4. The following media types are supported:

Several media queries can be combined in a media query list to configure the executable environment and define the detailed layout configuration, as needed. The following example shows a case in which the Web application runs on the executable environment having a screen media type and a 500 pixel minimum width. Its final view shows the layout inside {...} to the end user.

The following table lists the CSS media features, which you can use to specify the layout utilizing the media queries.

NoteThis feature is supported since 2.3.1.

You can combine this media query feature with the W3C type in your code. The final view shows the layout inside {...} to the end user:

The display mode can be classified as portrait or landscape for a rectangle-shaped device, or circular for a circular device.

If you use the orientation: portrait/landscape feature, the layout can change unexpectedly when the virtual keypad is displayed. To avoid the problem, use the device-aspect-ratio to configure the portrait and landscape mode.

NoteThis feature is supported since 2.3.1.

Application Migration to a Circular Device

This section illustrates an example for how you can migrate a basic application from a rectangular device (such as Gear 2 or Gear S) to a circular device. Use this example as the best practice to improve your layout.

The example uses the following HTML and CSS code for the sample application and its layout.

To migrate the application, use the following steps: