EFL relies on events and callbacks. In case of an event, such as a key press, mouse click, or a battery running low, the main loop calls the callback functions that are associated with that specific event. After the callbacks have finished, the main loop takes over and waits for new events, upon which to trigger new callbacks.

It is important to do light work in the callbacks and to return to the main loop relatively quickly. If there is heavy work to do, use an asynchronous mechanism, such as Ecore_con for network I/O, or threads for CPU-intensive tasks. Failing to return quickly to the main loop blocks the application UI and makes it appear frozen.

There are several event types in EFL, and their use depends on the level of the event. The event types from the lowest to the highest level are:

Figure: Event types in the EFLs 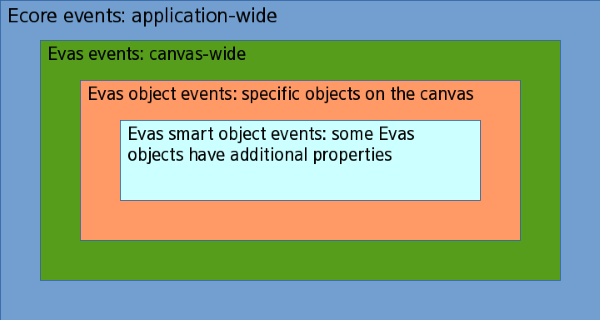 NoteThere are also Edje signals, which come from program blocks in the theme EDC files. They can be used from the high level Elementary APIs or the low level Edje APIs.

A realistic scenario involving various types of events is an application showing a button, which triggers the download of a file to be processed. There are progress bars for the operations.

The following steps are involved in the above basic event flow:

Events enable operations taking more than a few milliseconds' time to be executed outside of the main loop, therefore not blocking UI redraws.

The following figure illustrates the event flow that follows a click on the screen. 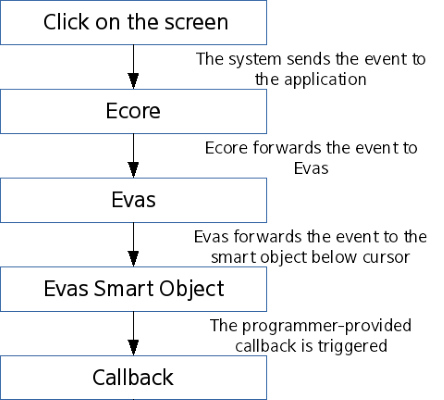