Dynamic Animation Library (DALi) internally defines a virtual 3D world (space) and maintains hierarchical objects in the 3D world. The hierarchical object tree is known as the scene graph. A node in the scene graph can have several children but often only a single parent, with the effect of a parent applied to all its child nodes; an operation performed on a group automatically propagates its effect to all of its members.

There are various types of nodes, such as image, text, and buttons.

Before starting UI programming with DALi, familiarize yourself with the basic concepts.

Actor is the primary object with which DALi applications interact. Actors are effective nodes that receive input (such as touch events), and act as a container for drawable elements (which are also nodes) and other actors. A DALi application uses a hierarchy of actor objects to position visible content. An actor inherits a position relative to its parent, and can be moved relative to this point. UI components can be built by combining multiple actors.

Stage is a top-level node of the scene graph used for displaying a tree of actors. To display an actor, add it to the stage.

The following example shows how to connect a new actor to the stage:

In DALi applications, a signal and slot mechanism is used for communication between objects. This means that, in the DALi event system, objects can send signals containing event information, which can be received by other objects using special functions known as slots.

Applications can manually disconnect from signals when required. However, DALi also provides safe signal disconnection. This means that when the connecting object is deleted, the signal is automatically disconnected.

DALi uses a left-handed coordinate system with the origin at the top-left corner, with positive X to right, positive Y going downwards, and positive Z going outside the screen with the default camera. This is convenient when creating 2D views.

The stage has a 2D size that matches the size of the application window. The default unit 1 is 1 pixel with the default camera.

DALi has a concept of a camera to display its virtual 3D world to a 2D screen. There are 2 ways of using the camera in DALi:

DALi consists of the following modules: 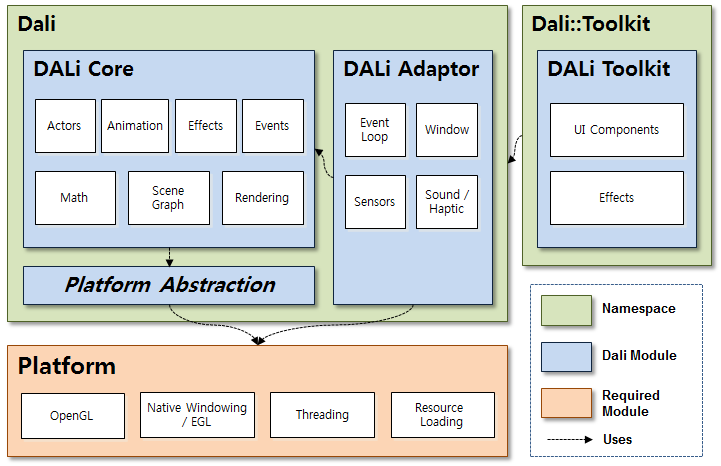