An actor is also the primary object with which DALi applications interact. All Controls and Layers are derived from Actors.

In an application, multiple types of event signals provided by actors can be handled through user-defined callback functions.

An actor has the following concrete types:

Adding an Actor to the Stage

Stage is a top-level object that represents the entire screen. It is used for displaying a hierarchy of actors managed by the scene graph structure. This implies that an actor inherits a position relative to its parent position and can be moved to another position with respect to its current position.

The stage instance is a singleton object (the only instance of its class during the lifetime of the program). You can get a stage function using the following static function:

To display the contents of an actor, it must be added to a stage. The following example shows how to connect a new actor to the stage:

By default an actor inherits its parent's position. The relative position between the actor and parent is determined by the following properties, Parent origin and AnchorPoint

In a 3D world, the Actor can be positioned in X,Y and Z axi. Although below only the X and Y is mentioned.

The Actor can have its Position set. Positions are Vectors and displace from the ParentOrigin. ( ParentOrigin to AnchorPoint ).

Therefore by default, an actor's position indicates the vector to its center from the top-left corner of its parent. For example (with the default camera):

The Actor::Property::INHERIT_POSITION can be set to "false" which would mean the actor's position is set as a world position. This is regardless of the ParentOrigin setting and the position of the parent.

Below the apple is parented to the green rectangle with position ( 0, 0 ), it is positioned at the center of the parent.

The second image has

Now the apple is still parented to the green rectangle but positioned center to the stage (World Position (0,0) ). The parent green rectangle can be repositioned without affecting the position of the child ( apple ). 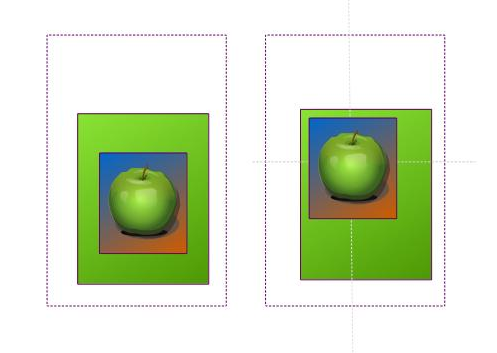 Below example shows the TouchedSignal() being connected to. The OnTouch callback is executed once the signal occurs ( The control is touched ).