Vulkan® is a generation API for high-efficiency access to graphics and computing on modern GPUs. It is an open-standard, cross-platform API designed from the ground up by industry experts collaborating under the Khronos consortium. It aims to address the inefficiencies of existing 3D APIs, such as OpenGL®, which are designed for single-core processors and lag to map modern hardware. It provides a much lower-level fine-grained control over the GPU to maximize performance and achieve a consistent user experience across different operating environments. For general information on Vulkan®, and the comparative merits of Vulkan® and OpenGL®, see the official Khronos Vulkan® Web site and Vulkan® vs. OpenGL®.

The Tizen platform supports the Vulkan API in order to provide the most cutting-edge 3D programming tools for you to create high-quality games and real-time graphics in applications. Vulkan® is especially recommended for performance- or latency-sensitive applications. With Vulkan®, you can achieve a much smoother user experience by parallelizing the rendering job across multiple threads which can feed the GPU in an efficient manner. Applications demanding explicit control on work submission, synchronization, and less power consumption can seriously consider migrating to Vulkan® as well. Tizen allows the use of the Vulkan API through SDL. 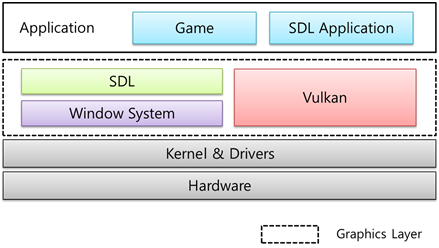 The main Vulkan API features include rendering 3D objects in an SDL application.

Before using the Vulkan API in Tizen, make sure that you are familiar with the following key Vulkan® features, which help you to align your application design around Vulkan® concepts and exploit the hardware to the fullest:

To enable your application to use the Vulkan® functionality:

Rendering a Triangle with Vulkan®

To render a triangle using Vulkan® in an SDL application: