Figure: Seen from the eye position, t1 is a back face whereas t2 is a front face

By default, vertices of every 3D triangle are in a counter-clockwise (CCW) order. In the above figure, for example, the vertices are ordered as (v1, v2, v3). While maintaining the view direction in the figure, consider only the x- and y-coordinates of the vertices. Then, t1 and t2 can be illustrated as in the following figure. Observe that t1 (back face) has the clockwise (CW)-ordered vertices while t2 (front face) has the CCW-ordered vertices.

To determine whether such a projected (2D) triangle has CW- or CCW-ordered vertices, use the determinant shown below. The first row is the vector connecting v1 and v2 and the second one connects v1 and v3. If the determinant is negative, the triangle is a back face; if positive, it is a front face.

Figure: Example of a determinant

Note that back faces are not always culled, but often need to be rendered. Consider rendering a translucent sphere. For the back faces to show through the front faces, no face can be culled. On the other hand, consider culling only the front faces of a hollow sphere to obtain the cross-section view of the sphere.

A window at the computer screen is associated with its own window space. A viewport is defined in the window space, as shown in the following figure. 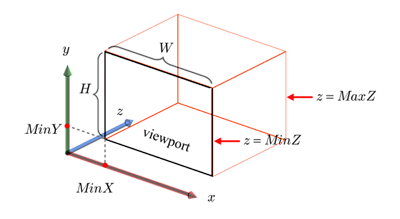 A viewport is created by the glViewport() function. Then, the glDepthRangef() function is called to specify the desired depth range. The initial values for the first and second parameter are 0.0 and 1.0, respectively. The process of converting the scene object (within the 23-sized box in the View frustrum figure) into the viewport of the window space is called viewport transform.

The viewport transform has converted every primitive into the window space. Considering only the x- and y-coordinates of a triangle, the last substage, rasterizer, breaks up each window-space triangle into a set of fragments.

Figure: Fragments for a triangle are colored in yellow 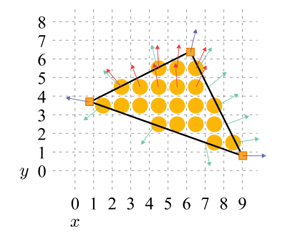